Once A Day Every Day All Day Long

It is completely walled off. At this point in time, the causes of Alzheimer's disease are still unknown. The loss of neurone and synapse are a feature of the degeneration and result in parts of the brain atrophying. The primary detectable symptom is that whole portions of memory are occluded. A map dating from 1685 by a Thomas Phillips sees the walls finely drawn with a double line. Tall ships with sails moored in what is labelled as the ‘Derry River.' Inside the delicate lines, in an asperous calligraphic hand, ‘London - space - Derry.' 1 It’s described as a protein misfolding disease. 2 The accumulation of plaque caused by abnormally folded protein. On the map, the scale in feet. The river, three and a half fathoms deep.

There is a surplus of images from inside and outside the walls. Every foot and fathom surveilled, chronicled, evidenced. The reportage. The personal. The historic. Is forgetting possible? They tell me that it's beautiful. Screen memories are created by the individual fabricating, substituting an impression to wall off a particular unpleasantness.3 The photographic moments - memories in the proximity of the walls - affect and anticipate the possibilities of that landscape. How it is remembered and in turn how that environment is shaped in each instance, each moment.4 Collectively and individually the operation of screening is substantiated and carried out with language. But the images, the memories in paroxysms spill through, rupture language and wash to the surface.

Owen Mor Care Centre is located far outside the walls, near the point where Lough Foyle narrows to become the ‘Derry River.' The stretch between the walls and Owen Mor, navigated by the Culmore Road runs parallel with the river. The consequences of a walled-off environment have been washing up alongside the asphalt for decades.5 So why don't we join hands together and be a happy family? Near the beginning of one of those decades, 1981, Joe "Boots" Dolan found the woman he was searching for.6 It's November sixth. The only one I need. The only one I want. The song reached number three in the Irish Singles Chart. In the cover photograph of the forty-five, Joe's leaning on a tree. Between May fifth and October third of that year, the collateral damage resulting from sectioning off, clear demarcation and division accumulate.7 So why don't we just get together and try to live our lives as one? 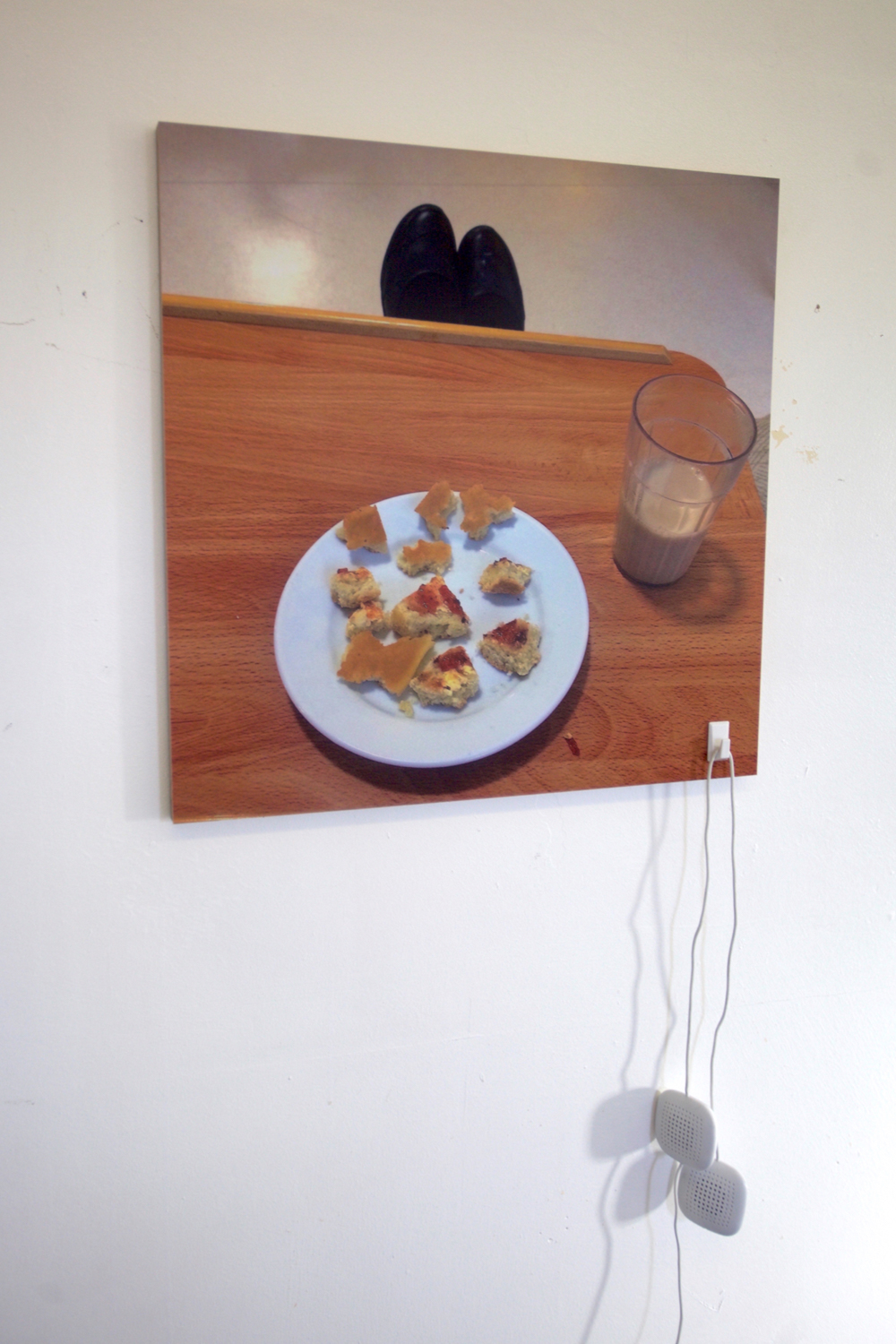 How do you remember that year and the people now? Was it the photograph we just looked at? Was it Boots in the tree? In section twenty-five of Camera Lucida, Barthes recalls searching for a photo of his mother that even in the most partial way, suitably overlapped with the notoriety of her person. He laments that in showing any of the results to his friends, that none would truly speak.8 She speaks in circles, in diminishing inchoate whispers. As Locky leans closer to the small woman in black socks and polished black shoes, her voice gets lower, the past washes to the surface. And if you look at me, you'll see a lonely man, who's been too long without a home. Her hips are cracked. The only one I need.

Barthes goes on to describe the connection he had with the personal effects of his mother located in the photographs. The sound of a lid on an ivory powder box, the large bags she collected and the low chair he kept near his own bed. Every Friday Locky butters the scones. The tension of history, its separateness, its division from our own time, must precede us. We must be excluded from it. History, for Barthes, is the time when his mother was alive, before him. The only one I need, to fill my empty heart. The items pictured in the photographs of his mother fold within them this tension of history, in their particularity. The anamnesis elicited by a picture of his mother hugging him awakens not just the moment, but the sense of texture in her clothing, the scent of perfumed powders.

Tributaries drawn like varicose veins stream along to a single stem just outside the walls of Phillips' map. The term ‘Bogg and Morash' are inscribed along the vein spilling into the river. In finding the perfect photograph of his mother, Barthes discovers an image from a walled-off time, from history. His mother was five when the photograph was made. Around the age she might have first gone to school. In this image, he found what he described as the familiar assertion of gentleness. He describes his grief as wanting an image that would be both justice and accuracy. I've never been in love before, they tell me that it's beautiful. She is in unspeakable pain. She whispers in incomprehensible circles.

In discovering justice and accuracy, Barthes selected a photograph that preceded his own time, from historical time, of his mother as a girl. The accuracy was not contained within the image as such, but the memory of his mother seemed to be reflected in a sepia faded photo with blunted edges.9 Below a dotted line in the ‘Derry River,' ‘Strand dry at low water' is written on a curve on the map of 1685. In describing the characteristics of the image that arouses tender affection, Sontag agrees with the formal properties of Barthes selection but adds another variety of image. For her, both the posed portrait and the incidental snapshot contain, more than other kinds of photographs, an odd, moving and premonitory quality.10 On the opposite bank of the river, it’s described as ‘all Woods.’

The temporal spaces that exist around our own, the before being bridged to the present through the photograph, trace not only the moment and the impression of photons, but as Barthes suggests, the network of effects and senses connected to that temporal section.11 The only one I need, to fill my empty heart. Sontag describes image making at its historical origin as being a practical, magical activity to gain command over the thing imaged. The further we look back through this history, the more clouded the distinction becomes between the object pictured and the image, the thing and its copy.12 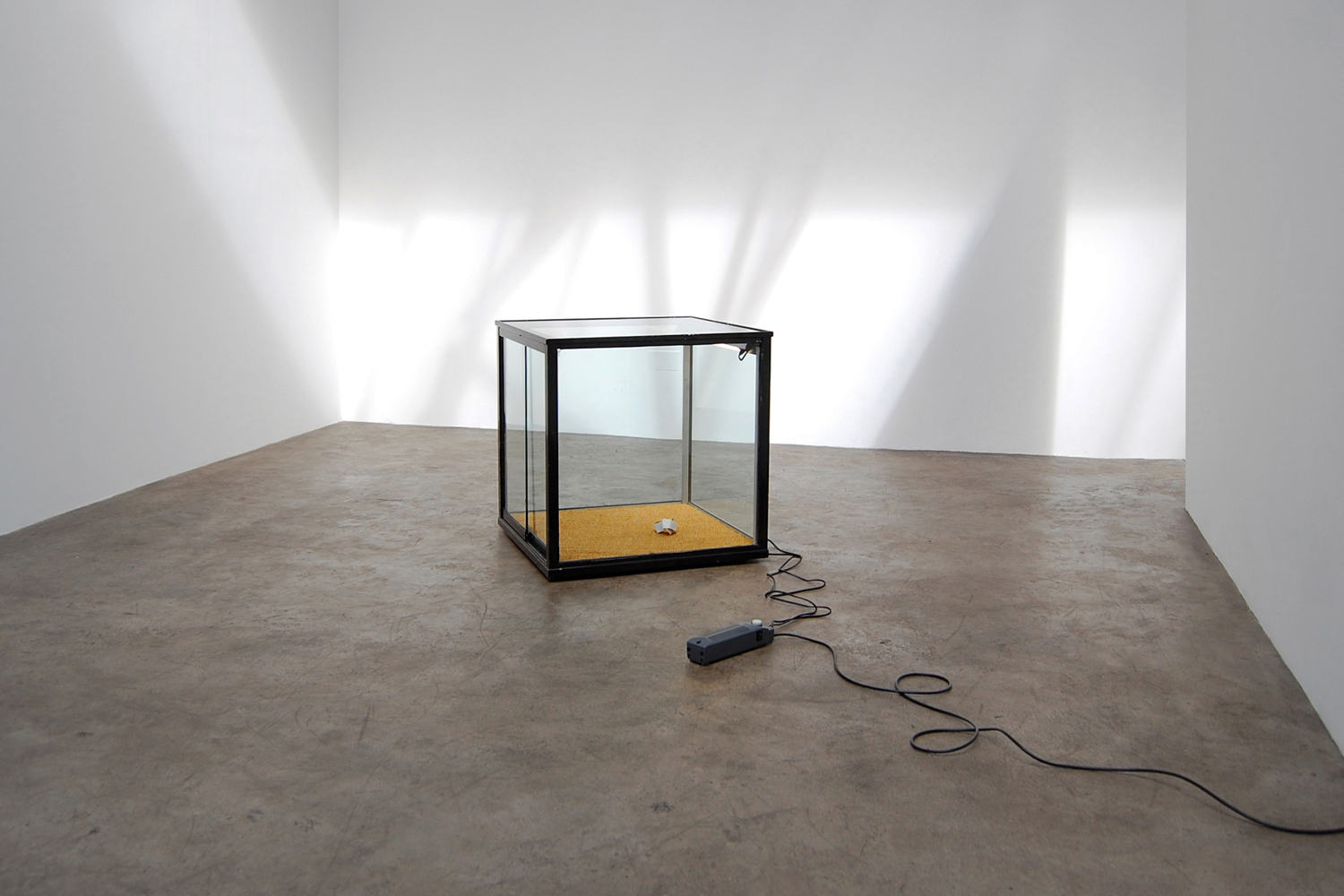 It's her first day. Day one. The distinction between the cardboard collar in the vitrine and the one that dropped from her shirt on that day becomes clouded. Is there a difference? Denying the primacy of original over copy is the final phase of overturning Platonism, Deleuze argues.13 The carpet in the cubic vitrine, the collar, the vitrine itself, flex within the white field of indeterminate potentiality. It is at once photograph and object. It's day one of school. ‘Hills that Commands the Towne,' Phillips wrote, just beyond the walls on the lower right of the map. The tie tightens snuggly under her chin replacing the oval of card. Carpet and card and momentary fragment are suspended and interminably stretched across time. The personal effects, a memento mori, the tension of history and being separate from a time before, or beyond our own.

And should we find ourselves returning eternally to this moment? The same carpet? The same card collar? The same map? Suspended between the undifferentiated abyss and the white nothingness of undetermined potentiality, Deleuze proposes that when confronted with this situation, it inherently assumes a pluralism of "wild and untamed" difference. A properly differential and original space-time, which persists alongside the simplifications of limitation and opposition.14 It is both the echo of the morning before school and that which apparently confronts us in this moment. Suspended between the dimensions of registered photons and the delineation of space. So darling let me rock, forever in your arms.

The particularity of these personal effects, the carpet, the card collar, the scones, the black shoes, continually reignite the pictured moment, but it is simultaneously walled off, the temporal horizon closed. Through instance and repetition, the trace presents and represents itself, further atomising out toward an undifferentiated abyss, a return. This incidental snapshot of a girls collar will, in a history following our own, through its particularity, point to an assertion of gentleness. The anamnesis elicited by this registration of matter - and further photographed and distributed across present and future networks - propose a continual reawakening of each intersecting moment and perhaps carry with it justice and accuracy.

Phillips refers to the point of intersection within the walls, where Butchers, Bishops, Ferryquay, Shipquay cross, as ‘Market Place.' A cubic space, now ‘The Diamond.' The only gate titled is ‘Water Gate,' the closest to the river. There should be one place you think about and know and perhaps long for - but never get to see.15 In Alice Munro's ‘The Bear Came Over the Mountain,' the character Fiona describes the relationship she has with her mother, her personal effects and affectations. It's you. As her proteins fold and the past gets walled off, the character remarks how she had little respect for the language of her mother or the stories it carried. It's you. Section twenty-nine. As Barthes looks at and thinks about the photograph of his mother as a five-year-old, as he remembers nursing her through her illness and toward death, he says, "she had become my little girl." It's you.

The exhibition ‘Once A Day Every Day All Day Long’ by Locky Morris was on display between the 9th of February and the 18th of May 2019 at the F.E. McWilliam Gallery in Banbridge and was curated by Riann Coulter and Feargal O'Malley. This text, along with an essay by Anne Tallentire and introduction by Riann Coulter, appeared in the associated publication.

1 Scott, "Plans and Economies: Defending the Plantation City of Londonderry,” 141-154.

The Guardian. “Derry has a high suicide rate – but could redesigning the river help the city?” Accessed 15 January 2019, https://www.theguardian.com/cities/2018/sep/10/derry-has-a-high-suicide-rate-but-could-redesigning-the-river-help-the-city