Abiogenesis, My Home, Our Home: A Reflection on the Photographs of Richard Lloyd Lewis.

“Wandering from sky to earth, from earth to fiery stars.
That elements should act like this is something reason bars:
There must be something has to stay,
So all things do not utterly to nothingness decay.”

-Lucretius, The Nature of Things. 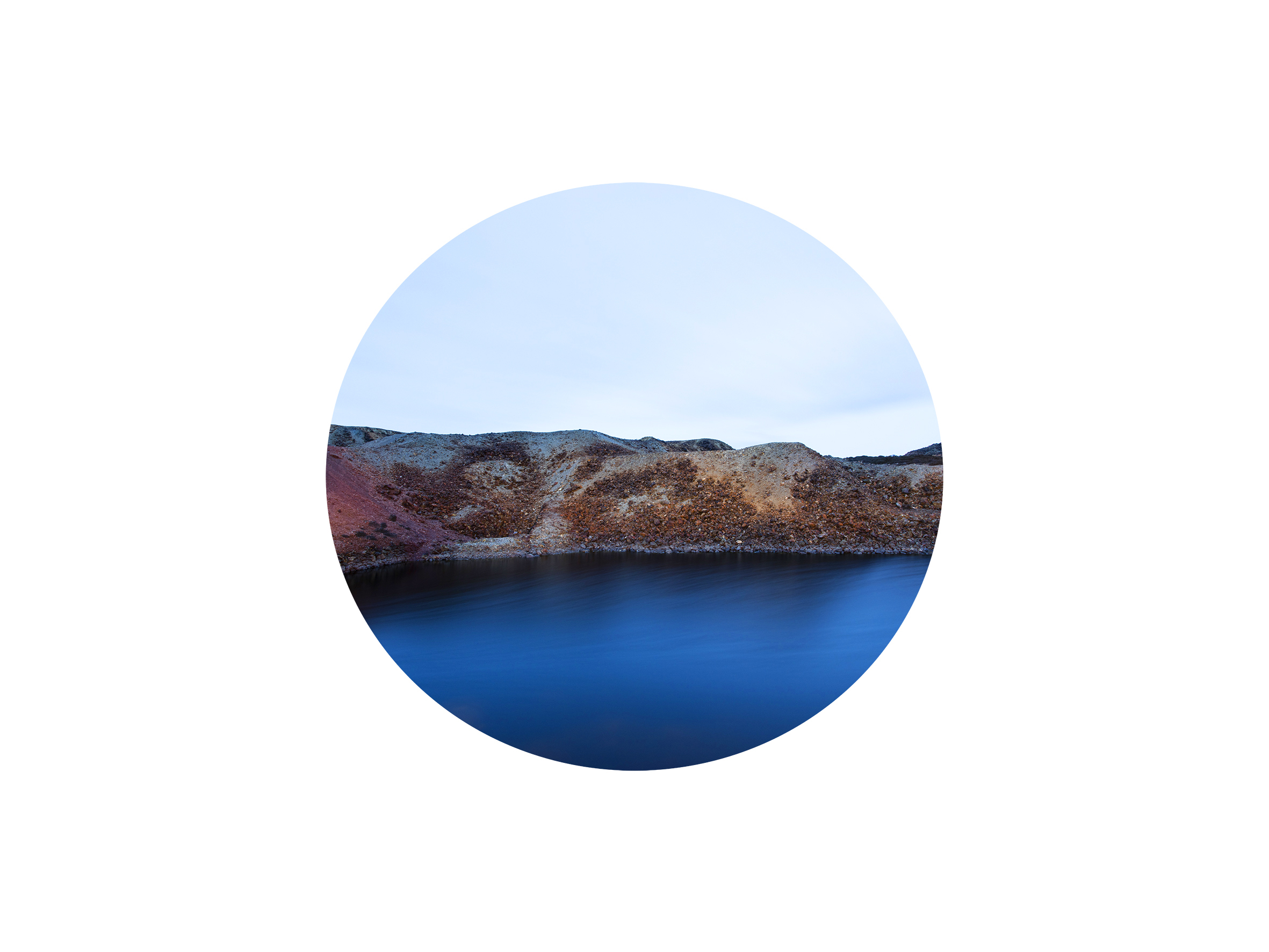 Stained with the copper ore and minerals that lie substrata, the tributaries that weave from Parys Mountain through to Amlwch and on to the Irish Sea provide the immediate landscape with its distinct colouration. This coupled with soil toxicity leaves little vegetation and a texture that speaks of the alien, the unfamiliar. This unfamiliarity is borne out of life's absence from this landscape, not necessarily that it is a difficult topology to conceive of or one that we perhaps have not encountered in a similar form previously, rather the aspect and meaning generated by its rock formations and deeply gouged earth are the antitheses of what can be considered habitable. However it is the concept of habitation that lies at the core of this series of new photographs by Richard Lloyd Lewis. Lewis invites us to consider a landscape that at once seems instantly recognisable yet simultaneously demands distance and caution, we must remain at a safe proximity, and with the eye of an explorer, observe.

If we remove from Parys Mountain one stone, does it cease to be Parys Mountain? Home and what constitutes this idea and its material reality are continually elusive, and when subject to scrutiny will often dissolve. Home is partially constituted by natural geography, the built environment, networks of individuals, their concomitant values, economy, a favourite pillow, shared language, the location of a record collection. The common thread if there is one, is the absence of threat, a sense of custom, convention and familiarity. Such representations are absent in Lewis's images, and the concept of familiarity we are being asked to consider is that of the planetary. The landscape Lewis invites us to observe, both in micro and macrocosm, through the mountain and its particulars, is an earth, perhaps the one we currently inhabit, perhaps not. We are asked to consider home in the vastness of geologic temporality rather than through the all too brief window of an individual existence.

The copper ore that is found at Parys and has been mined since the early bronze age, is found between the Ordovician and Llandovery epoch and is covered by a layer of volcanic rhyolites. The Ordovician period spans between four-hundred-and-eighty to four-hundred-and-forty-three million years ago, a period of about forty-two million years. The Llandovery period spans from four-hundred-and-forty-three to four-hundred-and-thirty-three million years. While the numerals and minerals suggest a known quantity and a tangible reality, the expansiveness of time and the hostility of the landscape deny substantial comprehension. We are delivered to this place in an exosuit or planetary rover fitted with delicate lenses to examine. However, we are guided, as the explores in Méliès' 'Le Voyage Dans La Lune' when they crash to the lunar surface, not simply to work and dig, but to dream. As they dream, they see the stars and constellation of The Plough as friendly human faces, and the planets characterised as beautiful women and old men. In the hand coloured version of this classic, pigmentation flushes and flashes over the surface of the celluloid and further abstracts the imagined forms of the lunar topography to the dimension of inner sight, the vision. 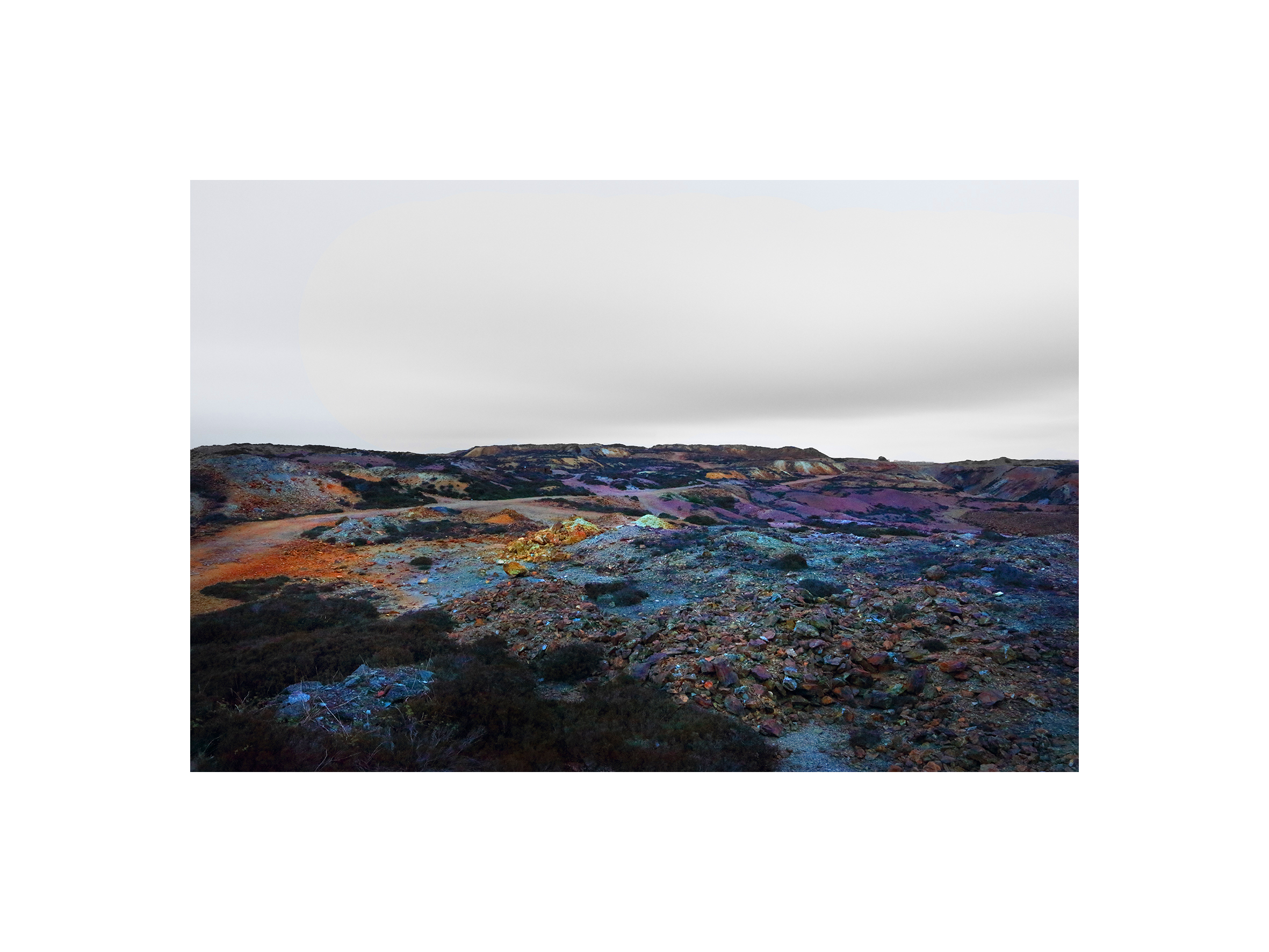 The obverse can be found in the 2009 film titled ‘Moon,' where the principle character Sam is engaged not, exploration, like the characters in Méliès' lunar expedition, but seemingly endless repetitive toil. The hope he carries as he mines the lunar surface is that shortly he will return to Earth, to home. The memories, dreams and photographs keep him inured to the barren landscape and mobile toward his goal. Even when it is revealed the memories are fabricated, (he is only one of many clones moored on the satellite and destined to be unceremoniously disposed of), the compulsion toward home is not diluted. But what of Earth is his? Not memory, dream or geography, only the belief that it is so. In both of these moon based narratives, it is the dynamics of the interior that chart and enmesh with the terrain and guide the body on its trajectory. 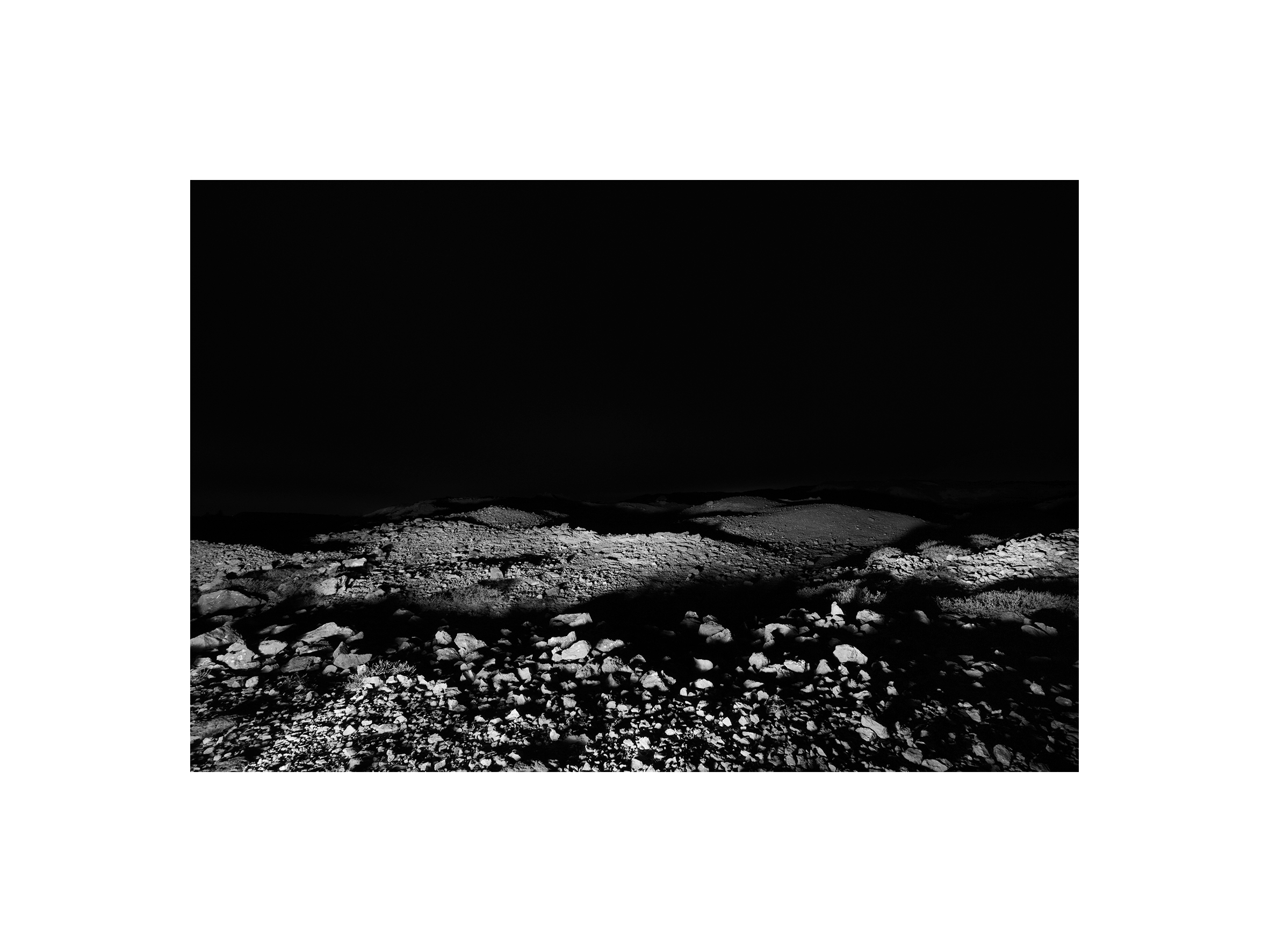 The photographs of this series oscillate somewhere between empirical documentation and interior reflection. In one instance the smooth monochrome of a night photograph locks down what we can see and discover to a few feet, before the landscape is veiled in black, and the ‘mysterium tremendum.' In another image, the mineral-rich terrain is flush with rainbow colour, the ‘cauda pavonis,' the peacocks tail, the final step that will cause the ‘prima materia' to become the ‘philosophers stone.' The alchemical processes of our western collective past sought the self not only through the interior, but in the ores and metals that this Earth produced. A simultaneity was thought to exist between these states, and one to illuminate the other in the discovery of greater truths. These paralleling realities and sense of pioneering exploration bear themselves out not only in the colouration of Lewis's images but in the careful choice of framing and composition. "That which is below is like that which is above & that which is above is like that which is below," reads Isaac Newton's translation of the second line of the alchemical Emerald Tablet. In a single rock removed from Parys Mountain and photographed against velvet black, we discover this recursive truth anew. The fractal nature of our shared reality bears itself out as these images of individual rocks, which appear at first as if retrieved samples from the landscape, snap between one state, then another. Between a small singular object, then a vast heavily shadowed asteroid, and perhaps a protrusion from the landscape seen from high above. At each level the details need not change, only our perception of them.

The landscape of Northern Wales, both in its bucolic pastures and unforgiving ore-rich mountains, has cultivated the visual language of Richard Lloyd Lewis since his childhood. Although separated from the land for almost twenty-five years, as with the ores, this series has been working on Lewis ‘substratum.' Emerging only now at the point when Lewis has been separated from Parys and North Wales equally as long as once he lived there. Home and our desire to either locate it or remain in its embrace is a continual process of discovery and reimagining, fraught both with disappointment and elation, and rarely granted eirenic resolve. Snowdonia and North Wales have long provided artists with the contours and topographical peculiarities that eclipse language and demand recourse to other mediums. John Elwyn's expressive brushwork and scintillating palette often described a breathing but jagged environment, and an opalescence that is at once intoxicating and potentially toxic.

This apprehension is echoed in Lewis's series. While the land depicted in Elwyn's paintings is distinctly Welsh and denoted as such, the land that we witness in Lewis's images may or may not be this Earth, and may also be located in deep time, in which direction, we cannot say. It demands caution. Charles William Mansel Lewis, a Welsh artist of the Victorian era also turned his attention to the North of Wales and Snowdonia on a few occasions. Distinct from Elwyn, Mansel Lewis finds the sublime amongst the heights of this terrain. His palette reduces, is more austere, the brushwork precise. However, as with Elwyn and Lewis, Mansel Lewis also sees and describes the awe-inspiring threat this land presents.

If we add one rock to Parys Mountain, is it still Parys Mountain? Though home may on occasion appear to have a fixed geographic location, it is rarely easy to locate. Equally difficult is establishing its location in time. This recognition in Lewis's new work invites us to consider these questions not only at the level of the self and home, but at the level of the planetary. In a single image in this series, a sliver of light is cast across the ridge of a tor. The light may be from our Sun or another distant star. This light may signal the dawn, and a time before microbial and mammalian life, or it may indicate the final shadow being cast across a barren world that has long since shrugged off its warm-blooded inhabitants. 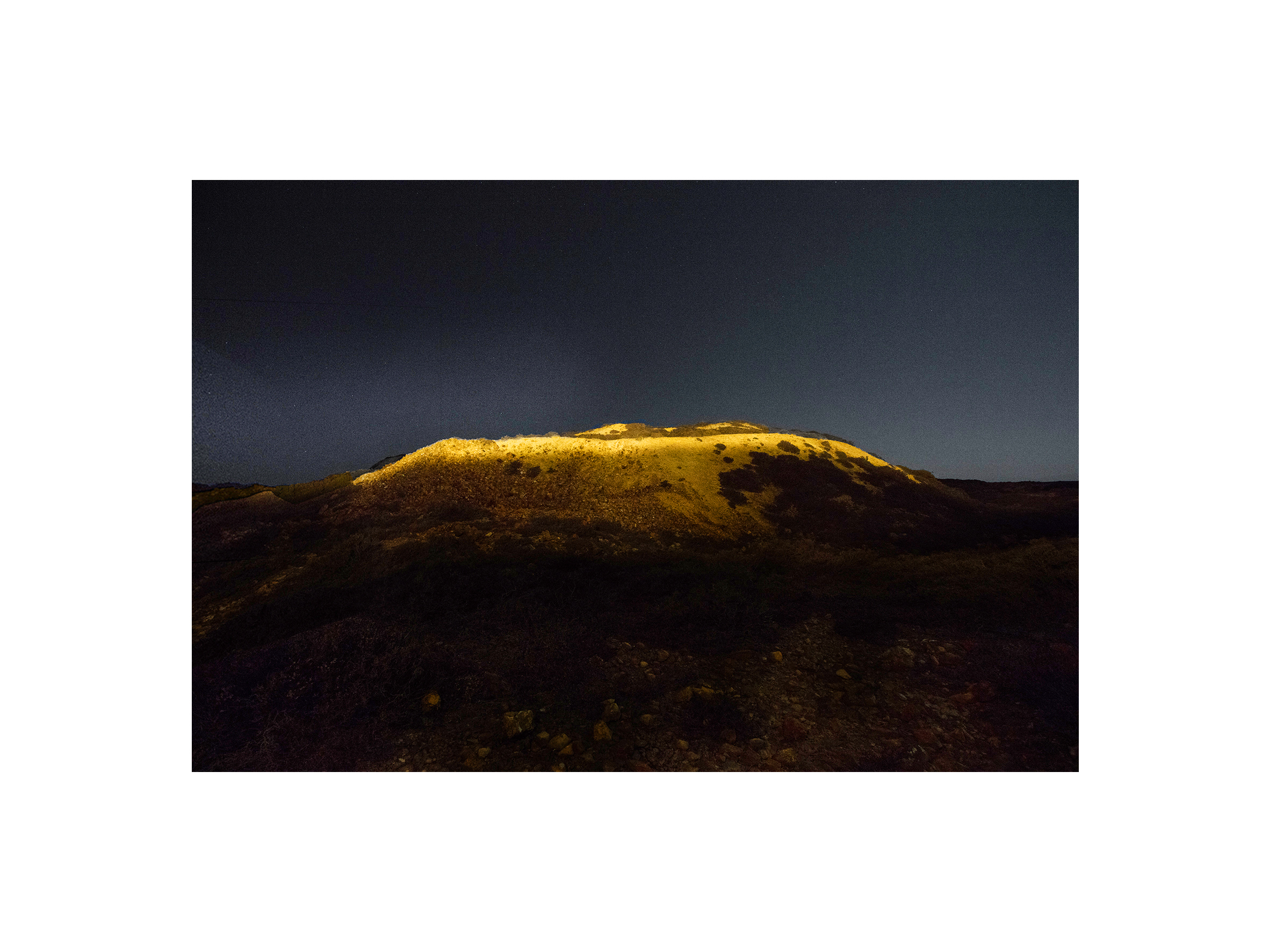 It is in the bowels of Parys that Lewis seems to draw a distinct parallel between the landscape of the interior and the mineral infused undulations of the mountains geological structures. In the Welsh medieval poem Cad Goddeu, Arawn the mythological ruler of the underworld battles with Gwynedd because of the theft of a white roebuck and a whelp. Arawn unleashes a scaly monster with one hundred heads and under the base of its tongue a mighty host, in the ridges of its neck a black-groined toad with one hundred claws, and a variegated serpent where souls are tortured and reside in the folds of its flesh. As with many other mythologies, the Welsh underworld is associated with dreams and the dead. It is the location of temporary and eternal slumber from which arises the greatest challenge in the hero's narrative, but also the greatest reward and safe passage home. It is only through confrontation with the black-groined toad and defeat of Arawn's supernatural army that Gwynedd can move toward his reward.

The hyperreal colouration in Lewis's subterranean images tilt at the origin of the rainbow blooms revealed on the surface, and much like the alchemical journey, suggest the resolution of the voyage can only be discovered through wilfully uncovering the layers of dark materials and pulling the mysteries of the darkest caverns to surface. As we collectively lurch from one news bulletin to the next contrived spectacle, we are reminded in these still photographs of the vast silence that exists beyond our daily hubbub. That this Earth and the infinity of other planets are indifferent to our concerns, conscious or otherwise. However our individual and collective journeys are inextricably bound to the spheres, and the location of home may only be glimpsed through this knotted symbiotic relationship, fuelling the belief that at some point the mystery will be unveiled.

This essay was originally posted on Baby Forest